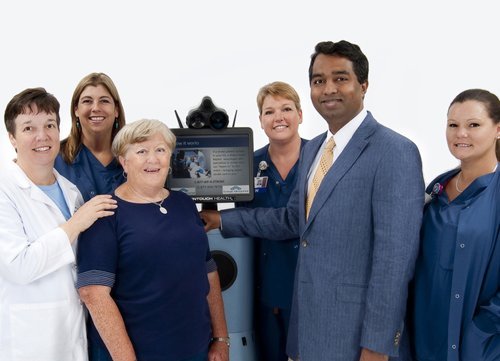 Posted at 21:42h in Success Stories by Zeus
0 Likes
Share

Two months after her stroke, Patricia Ayers is happy to be reunited with the team that came to her rescue. Moments after a procedure to open a blocked artery, Patricia Ayers exhibited signs of a stroke. Weak on one side of her body and unable to speak well, Ayers knew something was very wrong, but she was unable to tell anyone. “It was one of the most frightening times I have ever experienced,” she said later.

Fortunately, for her, she was already in the hospital, where Recovery Room nurses acted immediately, activating the stroke response protocol and initiating a “telestroke” consultation with Wake Forest Baptist Medical Center (WFB). The Neurologist at WFB “beamed” in on the telestroke robot and interacted with Ayers, medical and nursing staff, as well as family members. This long-distance intervention led to recommendations for treatment. For Ayers, that included a powerful clot busting medication, Activase, commonly referred to as “tPA.” Given in a timely manner, tPA can aid in restoring blood flow to the affected area of the brain, thus minimizing the extent of stroke damage and decreasing disability  associated with the stroke. Within 48 hours of her stroke and receiving treatment, Ayers was discharged to go home, fully functional and deficit free.

The telestroke program at WFB, allows community hospitals such as Lenoir Memorial access to world class stroke neurologists on a 24 hour, 7 days a week basis. Patients presenting to the hospital with stroke- like symptoms now receive the highest level of stroke care available, improving their chances of survival and reducing potential disability associated with stroke. The Foundation invested in a public awareness campaign through billboards, direct mail and a public transit banner.